skip to main | skip to sidebar

It's Not Polite To Point 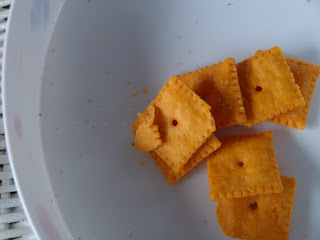 The kids were enjoying a bowl of Cheez-its at my sister's house when we happened to notice, a hand in the bowl.... With a pointing finger no less...
Do you see it?

We thought of putting it on ebay like the potato that looked like Jay Leno, or the piece of toast that had a picture of Mary on it.

But alas, I'm not a complete crackpot. Oops.. did I say that?

But I do so enjoy bizarre little things like this!
I've often thought of taking pictures of these strange sightings and making a coffee table book.

Youngins' are funny, aren't they?
You just never know what they're going to do. No idea what little gem will come to them next.

Tonight was such a night. It was VBS night! (vacation Bible school)

The night started off pretty well. During the opening song time, my boys, as is typical, instead of signing and clapping along played air guitar and air drums - each giving an impressive solo complete with knee slide. Cool!!

Then we moved to game time. Again, went well. Boys got creamed as the girls had twice as many team members.

Then we went in for 'Dockside Drive-in' - here's where it started to get fun.
"Miss Diane"... "I uh.. I ..... blaugh..." After the initial vomiting into my lap, I brought the little guy into the bathroom for him to finish and clean us up (not too bad). So good times - getting puked on. But then shocked that when the parent was told and they came in, that they were like "ya, I'm sure he's fine." and off they went. Poor little man was not fine, and continued to whine and lie across me the rest of the night.

But then.... Our little friend needed to go to the bathroom, so my older son takes him in. I can see the door. After a few minutes, I decide to go as I want to be there should assistance be needed. Son #2 follows me. Insists he too has to go. In he goes to join other two boys in the men's room. (yes, you are quite right to sense this was not a good situation)
Older boy comes out, "little friend" needs help pulling himself back together. Easy fix, I lean in the door, all is well.
After a few more minutes, I start to wonder what is going on with child #2. Clearly, he is happy. I know this because I can hear him singing rather joyfully through the door. I ask older son to see what's going on.
Door closes. I hear voices. I hear yelling. I hear "Mummy!!!!" I open the door...

There I find son #2 (aka Dennis the Menis (said with love)) with one foot on a stool, other foot IN the urinal (stop heaving, you weren't even there!) with underwear, shorts and shoes all strewn around the bathroom.
Was he surprised that I saw him? Ashamed? Maybe a little frightened? Oh no! Not my boy! He flashed me the biggest grin and had the nerve to say "LOOK" as he held his arms out to the side in a Nadia Comaneci gold medal earning pose.

Evidently my eyes bulging out of my head, face turning scarlet as little purple veins stared to protrude through my skin while my mouth was pursed so tightly my lips had completely disappeared was too nonchalant for him to realize that I had in fact, seen him.

With teeth gritted together, "You get out of there and get your clothes on this minute!!!"
After a few more threats, I mean instructions, out he came with a big, "Hear I am Mummy."

We've decided to give the little performer a week off to 'rest up'. I'm sure he'll use the time to think up more shenanigans!!
Posted by ladyofthehouse at 10:55 PM 1 comment:

Instead of making New Year's resolutions, I choose a word for the year. The word I chose for 2009 was Organize!

I've done... very so-so with that thus far. With young kids, it seems like you no sooner clean something, and they've undone what you had just finished previously.
Sometimes, this can get me feeling down. "Why bother!" I start to think to myself.

But with my birthday, I decided that this year I will take charge of things! So....

I went around the house taking pictures of the different projects I want to tackle. "Trimming The Fat" I like to call this endeavour. At some point, this will turn to self as well.. My 1st project, my closet. Here is the 'before' picture. Paperwork and books were piling up on the top shelf. Papers needed filing, books needed weeding out. I started hanging sweaters on the pegs that were meant for scarves, hats, etc.. I have far too many clothes that I never wear either due to them being out of season, too old, or the don't fit. (back to that need of turning myself into a project) My floor was covered with more books, clothes that had fallen off of hangers, shoes that hadn't been on my feet for years, a bag of diapers (seriously), and so on.

I started with the top shelf. I took all of the paper work, filed or threw out each piece of paper. Found a document I'd been looking for for weeks (score!). I then went through the books, set some aside for a yard sale, and put the rest in order. I went through pictures (some on the shelf, some in a box on the floor) and had a great time walking down memory lane!! (may post some of these pictures at a later date) I even found some nursing pads! Wow, they've been there a long time!

Next, I weeded through the clothes. Lots are off to Good Will. Some have been put into the 'dream bag'. The bag I dream of needing to take out again when I can fit into those sizes. A few pieces were even tossed. It was fun seeing fancy dresses that once had a lot of use in my past life (not getting new age on you - just talking about my early 20's when I had lots of fancy socials to go to... now finding a t-shirt without a stain will do for most of my social obligations ;)

Lastly, I rescued the floor. I put books where they belonged, took out the box that had been housing shoes with an inch of dust on them. Why did I have 5 pairs of high heeled black velvet shoes? I kept a few pairs, saved a pair of unworn boots for the yard sale, and tossed some heels that I've had since my 20's. 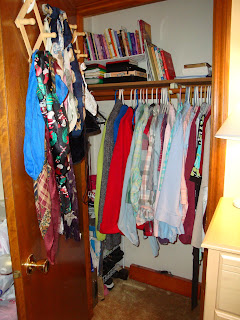 Finally, after hours of sorting, filing, cleaning and throwing, here's what I had. A clean closet!! Hooray!!

While I was attacking this project, I'm sure it goes without saying that my cherubs were destroying the rest of the house. Ahh... Well, today I tidy up the house. Catch back up on laundry. And hopefully move on to my next project. The boys closet!!!

What are you working on? 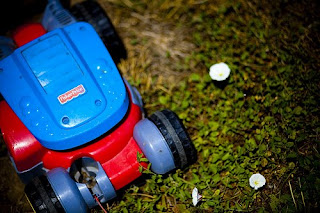 I did something today that I have never done in my life!
I mowed the lawn!
You see, as I looked out of the back window and saw the Serengeti, I decided something must be done or the children may get lost playing in the 'safety' of their own yard.
I shovel snow in the winter. I rake and bag leaves in the fall and spring (hate that it needs doing again due to leaves not knowing when they are supposed to fall off for goodness sakes). But mowing? Uh, no! Don't do it. You have to draw the line somewhere, and that's where my neon line is drawn my friends!! However....
My poor husband is layed up at the moment with an injured foot, so he is out of commission in so far as fulfilling his husbandly duties. (aka - yard work!)
So out I went with my husband's keys. This in and of itself proved to be a mission. "Which of these 72 keys goes to the lock on the shed" I wondered. After about only 12 tries, I cracked the first challenge. Next, "how the heck do I work this thing?"
"Hi, Julie? I have a weird question for you. Um, do you know how to turn on a lawn mower.. and then how do you shut it off when you're done?" With excellent directions, I had it! It took me only 3 pulls of the cord to get the machine going! Not only that, but once I got it started, my fans started to cheer me, "Yeah Mummy - you did it, you did it!" Their little fists were pounding in the air and all. I felt like a champ. Oh, wait a minute, I haven't done anything yet...
Off I went. What would I call my lawn mowing technique? Vacuumesque! Yes, I worked that baby like a Eureka! As best as I could that is. You see, lawn mowers as it turns out, are not easy to maneuver. "Hello, I'd like to speak to Mr. Dyson please." I love English accents typically, but his is rather snotty. I'd deal with it though to ask him to design a lawn mower that pivots on a ball. (see, you need a woman's insight on these things) Any who.. not going to worry, this will not become a real regular thing. After all, my neon line and all.
So on and on I went, cutting the long wafty grass with each pass. I finished when the mower started sputtering from the empty gas tank. I looked back. Yes, well done I think to myself. A very interesting pattern I left in the grass. I call it, lawn art! The National Enquirer may call it something else, and if they were to come around, I'd sell them all the pictures they wanted and call it a day :) (that's what people get for buying that rag.)
I was quite happy with my accomplishment. The only problem... I still have the front yard to do. Ugh!! The only other problem, migraine from the sun - double Ugh!!
image: FlickR
Posted by ladyofthehouse at 10:06 PM 1 comment: